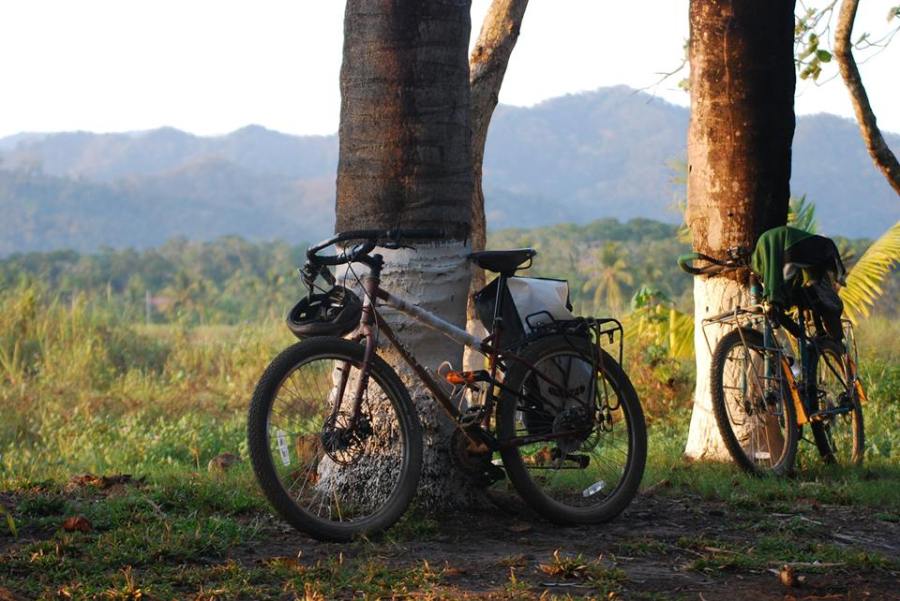 Over a year has gone by since I completed my Central America bike trip and the memories seem so fresh and yet faded at the same time.  With my next trip two months away I feel the need to get out my memories now before I go through the emotional molding that will prepare me for the next two years.  I have been hooked on this whole “bike touring thing” for five years now and ironically I have only done it once.  But to have done a thing only once, this one thing has left such an impact on me that it is hard for a single day to go by with out reflection.

I went through emotional highs and lows I never really go through in every day life.  Utter loneliness and the feeling of isolation.  The simple overpowering joy in coming around a corner, bonking like nobody’s business while barely able to keep pushing the pedals, then finding a stall selling fruit.  Forgetting how to speak english in full sentences due to thinking in a limited Spanish vocabulary, and the odd feeling of having it come back over several hours.  The complete freedom of going wherever you want whenever you want.  The amazing speed you make good friends with people, knowing you will only have a day or two to actually get to know them before you each go your own ways.  The smells, oh the smells still get me.

Where i’m currently living in Salt Lake City you don’t have too many exposures to the odd smell of leaves rotting in the humid heat of the tropics, the smell of trash sitting on the side of the road, something as simple as the smell of the sea. But every once in a while a strangely familiar smell will drift my way and I will get lost in that moment. Firstly trying to figure out where the memory is coming from and then simply allowing the memory recall of it to wash over me.  Smell being the strongest source of memory recall, i’m sure we can all relate to a moment where that simple sense will blindside us into a moment of remembrance.

The smells of certain foods I can recreate in my kitchen. The taste and smells of bananas I love, where before I was not particularly crazy about them.  Perhaps it is the positive association I would get, with needing calories so badly and knowing I had a trusty bundle of cheap bananas in my bag. Bananas ready to be eaten in the shade of a tree on the side of a road at a moments notice.

I’m sure with time all of these things would have become more normal, more every day, more routine.  The reason why these memories are so strong is because it is so different when compared to my everyday life here in SLC.  In some ways, the hardest part was coming back.  Everything is so comfortable and known.  It was strange to be surrounded by things you have known for years and knowing exactly what your next day would bring. After I had just gotten used to the idea that I didn’t really know what to expect other than rough hopes and simple pleasures in food and a place to sleep.

In the beginning I biked by myself.  I arrived and started out the trip terrified knowing full well I had thrown myself into a completely alien situation.  Many mistakes were made, very little attention was spent on looking at the elevation gains for my first few days of riding.  I had never even had a chance to ride a bike fully loaded or get used to my newly built steed because of the massive amounts of snow we had received.  Going from the winter temperatures in the 20s to the high 90s in Costa Rica ravaged me.  The realization of how far I was from anyone who knew me and how exposed and fragile I was every second of every day was something I couldn’t prepare myself for.  I cried, struggled, pushed and laid down in complete exhaustion on the side of the road multiple times.  But i had no choice other than to keep going, since I was in a torture of my own creation.

The small acts of kindness were what kept me going.  Support from my partner back home and family helped immensely.  For me, I was hitting my wall repeatedly but what kept me going was the fact that I knew I would be joined by my partner and our mutual friend in only a week and a half’s time.  This drove me to find enjoyment and keep going for the sake of having something positive to share with them once they arrived.  Small offerings of free fruit on the side of the road, friendly conversations, warnings and high fives alike fueled me.  Smiles from strangers and conversations in spanglish.  In truth, I didn’t cover much distance geographically but emotionally and physically I had pushed myself beyond the edge of my map.  Once they arrived I was a bit broken, scared, stressed but also beginning to see what could be really found in all of this for myself.

Upon their first arrival we quickly decided to learn from my mistakes.  We skipped sections that were deemed overly dangerous by renting a car and squeezing bikes in.  We went straight to the beach and stuck to more quiet dirt roads.  Having done this for two weeks I quickly found myself in the situation of pushing, assisting and motivating for their first time.  Being in a group we could laugh together, complain together and problem solve together.  Sharing the load of all of these new experiences and the physical exertion helped to solidify an understanding very quickly of bike touring solo vs alone.  Beginning anything new is a challenge but having each other made me see it in a whole new light. After my initial impulsive emotions on the whole excursion based off of the stress and the pain, I saw how much is gained from having someone their to share in the experience, good and bad.

We pushed bikes up hills shade hoping from one patch of life sustaining darkness to the next.  Feeling our bodies screaming at us to stop, that we were too hot, but we had nowhere to camp, no cold fruit juice to refresh us so onwards was the only choice.  Drinking two gallons of water a day but peeing once, finding that magical balance of electrolytes in and salts sweated out.  Rivers were crossed, and eventually beaches were camped at.  All to repeat the next day.  But with this form of travel we chose several times to simply stay, be on that beach, explore, relax and soak it in.  It was the main thing that kept us motivated at times, knowing there would be a beach waiting for us, shade to sit in and some cheap street food to eat.

With time came rhythm and we found a good pace that matched all of our interests.  In order to get to Nicaragua before they had to leave we got another rental car to take us to the border.  Once arriving at the border and after a long day and night of food poisoning I had to play translator, bike to our next destination in Nicaragua and take a ferry to  the island of Ometepe.  Oddly enough after that experience this is where I realized I could keep doing this for much longer.  The trip, I had started in pain and fear but had resulted in exhilaration, and excitement.  I spent nearly two weeks on an Island that could have been completely toured around in three days of very manageable riding.  I tried to do as much exploration as I could, got to make friends with several of the people living on the Island and made plans to continue the trip after my partner and friend needed to leave. 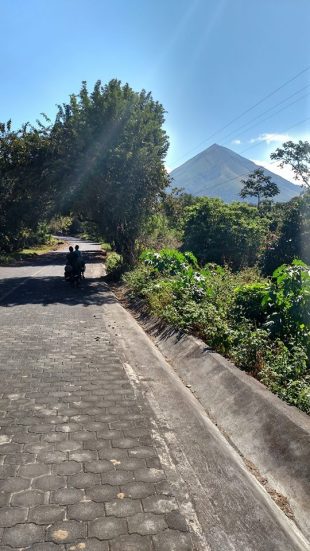 A moment of respite in the shade while enjoying the view of Volcan Concepcion. 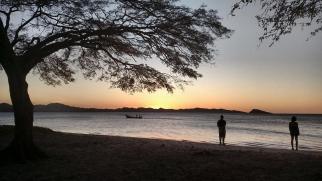 Another beach sunset looking across the ocean and the border into Nicaragua. 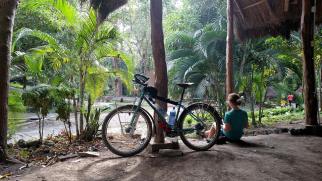 Napping on multiple benches after being up all night after camping next to a discoteca blasting music till 6 am.

Watching the sunset and the wind farms twinkling across Lago NIcaragua.

Once they left I was again on my own and I needed to be reacquainted with that feeling before I was comfortable moving on with my trip.  I stayed a few extra days, did some of the hikes that I had not been able to complete at first and then got ready to take the ferry back to the mainland.  To continue north, finding it in myself to be all right with being alone once more.

Once alone again the rhythm of the trip changed as well, complete freedom combined with complete solitude.  I biked north, made quick friends in the places I could.  Visited some beautiful old cities and even volunteered for two weeks with an education program, finding that the joy I had was not just in the adventure but in trying to get to know a place beyond simply biking through it.  The support of the people I met was boundless and when I finally had to turn south and begin my trip back to Costa Rica, to make my flight home, I did it with deliberation and a bit of melancholy.  I met other bike tourists during this time on similar trips to my own and even several who were years into their own adventures.  The seed had already been planted for wanting more and these moments solidified it. 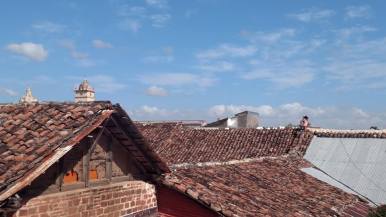 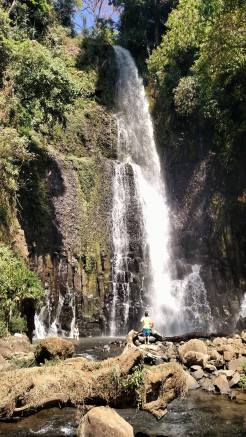 It was strange to have such a personal journey abroad but also inwards.  Meeting other travelers going through similar processes and also meeting local people who were accepting me into their every day lives and routines.  Having the privilege to do the trip I was on made going home a bittersweet moment.  Sitting in the airport I listened to music for relaxation while looking about, feeling more alone their in a different way than I had before, surrounded by people from the country I was about to head back to.

Now having been home for just over a year I have been putting the final touches into what will be the next big trip, the one that drove me to almost impulsively go to bike around Central America in the first place.  I am living in the same home I left, doing work that I really enjoy and looking back now, I go through every emotional high and low one can go through on the regular daily routine of a good life.  In just two months I will say good bye to all of this and once more be on the move.  The biggest difference being I will have the potential of two years to really contemplate what I am doing, and what I am experiencing.